One of my side gigs as a writer is working with Sales Agents who, as is common in independent film, are often a key factor in putting together the budget. (Here's some background reading if you're not familiar with independent film finance and distribution - Film Finance / Sales Agents) 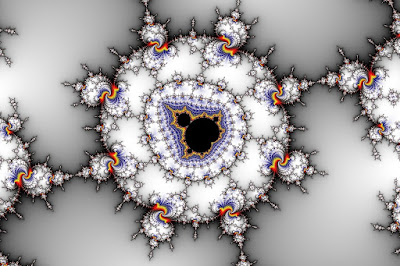 Producers looking for finance often send their scripts to my clients and my clients send me those scripts for appraisal. Where I differ from a traditional script reader is that in addition to my thoughts on the script itself I have sales experience and have attended international film markets for many years, so I'm able to offer some insight into how safe an investment any given project may be. I might not have precise knowledge of the latest up-to-date trends, but I know what tends to work and in discussion with an experienced sales agent I can often help them figure out if this is a project for them (or their investors) or not.

A lot of it is common sense - simply asking "are there sufficient elements with which everyone downstream will be able to sell this film too?" will give you a fast but reasonably accurate sense of how a film will finally sell. You're just putting yourself in your buyer's shoes - basic marketing, right?

Using my Fractal technique I'm able to go into a bit more detail. You all know what a fractal is. It's a mathematical shape that has the same or similar structure at different scales. I've found it useful to think of a film as basically the same premise being expressed at different scales.

Most of the time when you watch a film you know at least a little about its premise. Based on what you know going in, you expect the film they show you to have something to do with what you thought was coming. It has to be a reasonably rigorous exploration of the premise you were expecting. We Brits have an expression for this, which comes from the now famous advertising slogan, for when something "does exactly what it says on the tin".

This fractal idea is more than just some abstract mathematical nonsense - it's actually a very useful tool for wrapping your head around a film, right from concept stage. Simply put - a film's premise, tone and story should be present and resonant in every scene and every aspect of its marketing. Another way to visualise and break this down is below:

We're effectively increasing the number of words used to express the same idea, and you can see how everything from the Title to the Tagline, Logline, Synposis, Trailer, TV Clips and all the way up to the Script and the Finished Film should ideally be a fractal of the same premise.

For a film to be a success its premise needs to get people thinking and talking about its themes and implications. For this reason it's possible to look at a script, a logline, a synopsis and a treatment side-by-side and ask yourself not only if there's a strong premise there, but also are there opportunities to strengthen any one of the elements. If the premise is strong and the synopsis is strong but the script isn't doing the premise justice, then it's extremely easy to spot using this technique. It's also surprising how very often a script doesn't need that much more work once you identify and fix such high-level premise problems.

There's a fun test you can try - before reading a script for the first time quickly brainstorm all your expectations of it. If you have a logline, or even just a title and a genre, it's actually pretty easy to determine some scenes that "must" be in that film. If they're not in there perhaps someone's missing a trick. You're always measuring a script against other examples of the genre and, if the script in your hands doesn't measure up, this approach offers you multiple levels on which you can figure out how to fix it.

By extension if you're starting out on a project you can brainstorm using the above graph, jotting down images for the trailer, phrases for the logline and so on. If you're stuck on a rewrite, try sending only your title and logline to a friend who doesn't know about the project and ask them what they think would "be in the tin". They might come back with some great ideas you hadn't thought of... or you might not like or agree with their answers, in which case maybe your logline is skewing their expectations away from what you're trying to create. Either way you're going to have valuable insight into how your project is seen by others, and how it might be perceived in the marketplace.

Stay on topic, on theme, on premise and on tone right from the two-word title to the 25 word logline all the way up to the 25,000 word script and there's a much higher chance you'll have a project lots of people can get enthusiastic about pouring thousands of hours and millions of dollars into making.