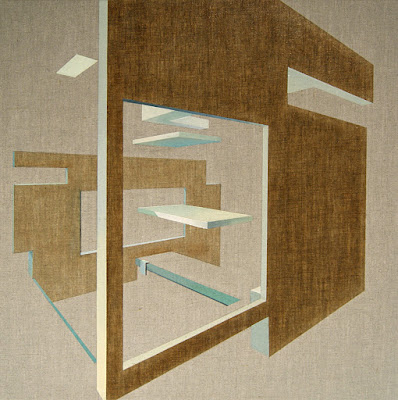 Recently I asked some clients if there were any specific areas of interest they'd like me to post about on this blog — particularly as I haven't been very active on here for a while (having run out of steam a little while back after a good few years slogging at it).

One subject that came up was the notion of 'geographically blocking out' a scene for maximum drama and clarity. It's an interesting one. Certainly, it's a key aspect of the craft, and it's true that I don't see a lot written on this, particularly compared to character, story or dialogue.

Now that I think about it, this is one of the major parts of what defines a writer's voice. What could be more quintessential to screen-based drama than the writer's choices of how the reader or viewer is oriented in space relative to the scene? It surely then stands alongside character, story and dialogue in its importance. Let's take a look.

A key tenet of modern screenwriting technique is one-sentence-per-shot, and this convention is one of the main things which sets screenwriting apart from other literary forms. Quite apart from sheer practicality (avoiding unfilmable information) it's a writer's best tool to convey what they want on screen without committing the cardinal sin of over-directing or listing shots.

Well-thought-out geography with strong visuals can allow you to build tension without dialogue, ratchet up the dramatic power of a scene with dialogue, and can add suspense to the most high-octane action set-piece, or the quietest parlour.

At the very least it's the only way I know to keep every reader totally apprised of how all the characters and important dramatic elements are arranged on your proverbial chess board, and how that evolves over time. That also extends to the actors and the director, most of the crew, and onwards into the edit suite. Sure things will change once it's out of your hands and the realities of filming kick in, but you have the best shot of your script being what you see on screen if you're specific about the placement of the pieces.

How Much is Too Much?


The next question has to be how specific is too specific. I think the best answer to that is that it kinda depends how you want to convey pace and tone at any given moment.

If Darcy stands beside the fireplace in a stately home, then he presumably has at his disposal several possibly heavy ornaments on the mantlepiece, and a set of fire irons. Who else is in the room, and their whereabouts, is probably therefore also interesting. The tension deriving from other aspects of the drama should be your guide.

If Knuckles follows Arabella along a canal path in the fog, then the reader might make some assumptions about that, based on how far apart they are, and who can see whom (if she trips and breaks a high-heel how much time does she have left?) but not care about much else, as it would slow down the action for no good reason. (And if you tell me it's a Jimmy Choo that'd better be super-relevant).

How much you describe is always a trade-off, and a pro will often obsess about the right amount for pace, but that's one of the problems about quality writing: it takes a lot of time, particularly at first.

One Sentence Per Shot


So going on the basis of a page of script to a minute of screen, we can get a sense of pacing based on your action description, and this is a powerful tool in your armoury as well. You can choreograph incredible action and interpersonal interaction, but keep one eye on length. If that's the purpose of your scene or sequence, then go for it. The main thing is to ensure clarity at all times.

I find it useful to enter a very focused and utterly 'literal' state when reading or editing, in the sense of asking "how could a fool or a pedant interpret this wrong?" This again takes time, but you quickly internalise both fool and pedant, and invoke them as you go. This helps to ensure your scenes are rarely, if ever, unclear in important details, to a wide spectrum of readers, most of whom, we hope, will soon have to translate your instructions into sets, lighting, physical blocking, props, camera positions, rigging... you get the idea.

You also get to create a complete edited movie in your head, and what's not to love about that?

Any questions or suggestions based on your experiences, please share below.