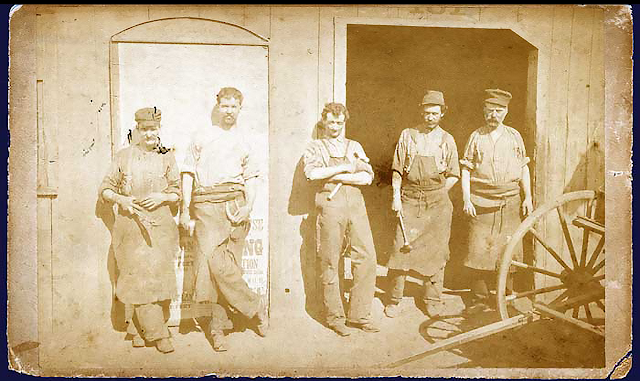 A very decent pub lunch with friends this weekend was made even more pleasant by my conversation with someone I hadn't met before – a sometimes writer himself, and long-time TV producer.

Somehow we got to talking about dramaturgy, and he reminded me that the origin of the word "playwright" is not what one might assume. From Wikipedia:

The term is not a variant spelling of "playwrite", but something quite distinct: the word wright is an archaic English term for a craftsman or builder (as in a wheelwright or cartwright).

Hence the prefix and the suffix combine to indicate someone who has "wrought" words, themes, and other elements into a dramatic form - someone who crafts plays. The homophone with "write" is in this case entirely coincidental.*

The term playwright appears to have been coined by Ben Jonson in his Epigram 49, "To Playwright",[1] as an insult, to suggest a mere tradesman fashioning works for the theatre. Jonson described himself as a poet, not a playwright, since plays during that time were written in meter and so were regarded as the province of poets. This view was held as late as the early 19th century. The term playwright later lost this negative connotation.

* Actually I doubt that the homophone with "write" is coincidental at all. Both words come from Old English, and can be traced far earlier, so I suspect a bit of intentional wordplay. But isn't it interesting how it stuck? The connotations of physically grappling with the raw material, and hammering it into shape are so much more emotive than the plain descriptive act of scratching ink onto paper.