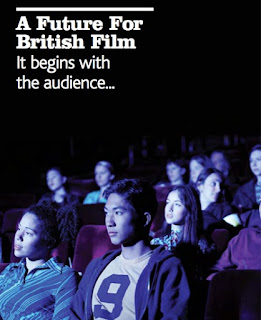 "It begins with the audience..." is a great place to start.

This is a short excerpt from page 4 of the government's recent Film Policy Review paper:


Whoa whoa whoa whoa – hold it right there! I think this is the most important paragraph in the whole hundred pages, especially since the report's snazzy tagline is "It begins with the audience..." Nevertheless they never again address these stunning statistics. I'd like to know more.

Despite twenty minutes searching I can't find the rest of this Odeon survey, and I'm not going to waste any more time looking, but I'd really like to know what percentage of respondents expected entertainment from an American film. I'm going to proceed under the fairly reasonable assumption that it's higher than 58%. In fact I'd be a bit perplexed if it was less than a plump, round 100% since we are, supposedly, in the entertainment industry.

Transpose it onto other industries – if only 58% of shoppers expected a British product or service to actually work as advertised, you'd naturally expect people to get wise and start buying foreign.

Call me crazed and idealistic, but I'd like 100% of British cinema-goers to turn up at the cinema expecting to be entertained by home-grown fare, not 58%. No combination of tax credits and clever financial instruments, nor of "film education" (presumably in which fifteen-year old kids are schooled in why "bleak" equates with "worthy" and "important") is going to change the fact that close to half the potential audience doesn't expect a British film to entertain them. This is a major marketing problem for the soon-to-be heavily promoted British film "brand".

Americans reading this blog – or anyone overseas for that matter – may be fortunate enough to have been shielded from the British tendency to make depressing social commentary type films, because their own distributors can't see a profit in releasing them. But anyone living here knows the cliché that a sizeable segment of the British film industry seems to revel in tales of misery, drug-abuse, child-abuse and dank concrete tower blocks with broken lifts that stink of piss and general human degradation.

Luckily this isn't actually the case as much as it was, although there are still some joyless auteurs out there keeping the nightmare alive for us all, god bless them. No – lately we've had a lot fewer films during or after which you wanted to bludgeon yourself to death with the nearest available blunt object just to end the abject misery of your existence. This is a step in the right direction for our industry.

There are many things to be cautiously optimistic about in this new Film Policy Review report, and encouraging stronger links with distributors is one of them, but we should be wary of creating a situation in which films are financially viable only because they received BFI investment. The idea of investing in minimum guarantees is promising, as it lowers the break-even threshold for a distributor while still requiring some investment on their part. This is a marked improvement on how it used to work.

In order to secure Film Council investment over the past decade a project needed a distributor signed-on from the outset. Even if nobody wanted to distribute the film in question, if the Film Council wanted to finance something arrangements were made in advance to fulfil the remit that all films funded should receive a theatrical release. Somehow distributors were always found (and I'd love to see inside those account books to follow which way money travelled on some of those deals, or perhaps it was just bulk-buying and dealmaking across multiple titles). The distributors were contractually obligated to release the films so in some cases films received little more than a quiet Leicester Square premiere, followed by a straight-to-video release (not a bad thing in itself, but clearly quite telling of the distributors' intentions for the film from the start).

What resulted was a lot of films being greenlit which, however worthy or entertaining, simply hadn't been created for the marketplace or – even if they had been carefully crafted and nurtured by their producers and creatives to go out into the marketplace, be strong and thrive – their beloved films were sent away to live with distributors who didn't love them, didn't want them, couldn't care less and refused to nurture them. A lot of even the good films died of neglect.

Making films is hard. Marketing films is hard. However I believe it is possible to combine writing with market awareness to craft an end product that entertains people enough – and is remarkable enough – that people recommend it to their friends, however "worthy" the subject matter. My dictionary defines entertainment as "the action of providing or being provided with amusement or enjoyment". That should be in the contract and all too often it's overlooked by filmmakers and civil servants alike. Fix that and we'll fix our industry. The numbers will rebound. We'll all make more money. The rest will take care of itself.


Much has been made of David Cameron's embarrassing statement last week that we should be creating more successful British films, but perhaps it was just his clumsily-polite way of saying we should make fewer films that result in him wanting to kill himself.

(Scripts and consulting services are available)

I had a pretty unfair opinion of Joseph Campbell for a long time, not because I ever had a problem with his stuff – I find it very interesting – but simply because it troubled me how new writers or naive development execs would try to make EVERY story fit the hero's journey model, regardless of whether it was applicable or not.


It felt as though, once they'd read Chris Vogler's The Writer's Journey, they were pretty sure that was all anyone ever needed to know about writing. The crap that people would come up with as they tried to make tenuous connections between their story and the hero's journey structure and archetypes was, often as not, utterly embarrassing and a complete waste of everyone's time.


There is a hell of a lot more to screenwriting than just optimistically plugging in Campbell's monomyth paradigm and hoping an epic story will somehow result. Some stories just don't want to be mythic and shouldn't be forced to be against their will.


And also – as Scott Meyers' recent series of posts about Joseph Campbell attests – there is lot more to Campbell than the hero's journey too. This personal tale from Scott at Go Into The Story is the penultimate in his excellent series, all of which is well worth a look back over if you're interested in learning more about Campbell (as, naturally, is his Wikipedia entry).


Just please promise me you won't go around afterwards quoting him like everything must conform to monomyth paradigms, because you might realise after a while that you we're wrong, and then you'll just feel silly.