Yeah yeah I know I haven't written a new article this week. I'm nailing down the first draft of a new Gothic Horror spec script, which has been waaaay harder to finish than I thought it'd be. My outline for the third act was much too loose and I thought I'd be able to make it up on the spot as I have pretty successfully many times before. I wasn't. I had to rethink the entire thing.

Lab bench in meltdown. Eyebrows truly singed. Expect a post about that soon.

In the meantime this new creativity website has appeared, fully-formed as if from nowhere – like Minerva from the mind of Jupiter – and so far its journalistic quality is outstanding.

Here's a paste from their About page:


The Creativity Post is a non-profit web platform committed to sharing the very best content on creativity, in all of its forms: from scientific discovery to philosophical debate, from entrepreneurial ventures to educational reform, from artistic expression to technological innovation – in short, to all the varieties of the human experience that creativity brings to life.

“Oh, did I not mention that dragon-wizard time-travel spaceships are sentient and can crossbreed to produce baby spaceships? Well, they can.”

I've been chuckling at Chuck Wendig's posts for a couple of weeks now, but with this cheerful rant he officially makes my blog list on the right hand side. Prepare for fruity language.

25 Things You Should Know About Suspense And Tension


He has a book, which I haven't yet read but surely will before long -

500 Ways to be a Better Writer

For ages the only way you could study John Truby's theories was to go to one of his expensive three-day seminars. And to be honest that's probably still the best way to be introduced to his obsessively deep analysis of story and writing theory. His 22 Step breakdown of what makes a great story is phenomenally well thought through and mastering it will undoubtedly make you a better storyteller.

Nowadays he has books and short courses and seminars online of course, and various software on his website but a few years ago, before any of that existed, a friend of mine lent me a set of CDs recorded at one of Truby's masterclasses. They were sixteen hours long in total and covered so much ground... it's hard to describe how life-changing they were. I've looked for them online to recommend to others and the closest match seems to be this 14 hour audio course on Truby's site. $649 (or around £400 to my fellow Limeys) may seem like a lot of money to spend on a set of MP3s, but having had the opportunity to listen to the whole thing on a loop many, many times over, I can assure you it's amazing value if you're really serious about mastering story structure as you can listen to him over and over - and that's vital as there's so much really cool stuff to wrap your head around.

The scope of things he discusses is phenomenal and by the ninth or tenth listening I was still taking in new concepts at a rapid pace. At times I'm sure I felt the internal structure of my brain changing.

For me however the most important tidbit buried among the many dozens of mind-altering concepts he explores is what he calls The Four Necessities - "the nucleus of any story - the four elements that will make any story work" which he describes in one short twenty minute section at the start of day two.

And The Four Necessities are:


The Need, The Inciting Incident, The Desire Line and The Opponent.

Sounds pretty simple. Hardly mind-blowing info here surely? You probably know what these terms are and you probably have them in your story already. Why are they so vitally important that I'm still banging on about them like I've found a map to the Holy Grail?

The reason these four things are so vital to your story, to the successful working of all great stories, is because all four of these elements have to be intimately tied together. Each one must be intimately and necessarily connected to each of the other three in order for your story to truly work.

The Need is what's missing in the hero - a flaw in his character that he must overcome in order to have a good life. The Need is usually based on one great weakness. Your hero will not be aware of their need and will not fulfil their need until the end of the story, usually when they reach breaking point and when all else is lost. You could frame it that overcoming their need (or failing to) is ultimately the purpose of the story. It is the thing the hero needs to change in themselves if they are to have a good life. It is the aspect of their character which is most likely hurting someone else in some way too - making it a moral imperative that this person change.

The Inciting Incident is the event from the outside world that causes your hero to come up with a goal, or Desire Line. Thousands of things could happen to kick start the hero's story, but you have to find the necessary one. The necessary one is the incident that will ultimately cause your hero to confront their Need. This means the Inciting Incident must necessarily inspire the hero in pursuit of their goal, or Desire Line.

Desire Line - the necessary goal that will eventually cause your hero to confront his Need. It's also this Desire Line that will run your hero smack into his Opponent. It's useful to think of the hero's path to their goal as a line, because that means it has to intersect other characters' Desire Lines as well, most obviously the Opponent. It doesn't have to start as an epic quest, indeed many characters would never embark on a journey if they knew what perils lay ahead. Rather their journey will grow in intensity in unexpected ways as obstacles and opposition grow in their desire to stop the hero.

The necessary Opponent is the one person in the world best able to attack your hero's weakness, the flaw in his character. He also necessarily wants the same thing as the hero - they're competing for the same specific goal. If the hero and their opponent aren't pursuing the same objectives, then they can both get exactly what they want without conflict and everyone can go home early. If you're stuck working out what it is they both want, it's sometimes useful to frame the statement in the form "Hero and Opponent are both fighting for control of the same thing."

Have we tied everything together yet? Not quite. Because in order for the four necessities to be as intimate as possible, it's far stronger if the Opponent is the cause of the Inciting Incident, either directly or indirectly. Once you start looking for examples of this in great movies you'll wonder why you never spotted it before. This is one of the great strengths of Truby - he points out things that have been in plain sight your whole life and boils them down into techniques you can apply to make your writing stronger. 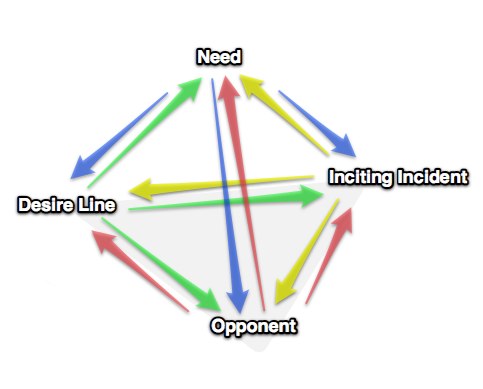 He goes on to say that you should take more time with your four necessities than with any other step, because once you get these right you’ll be moving very quickly. If you don't get these elements intimately connected you will struggle with almost every other area of your story.

I'm ashamed to say that I've found this to be true the hard way. I've neglected to focus on this part of the planning and found myself stuck with goals and opposition issues later in the story - just as everything should be coming neatly together. Save yourself the heartache.

This stuff isn't easy to apply to a story, but it's worth the effort. You will have such a strong nucleus (Truby's word) at the center of your story that it will be able to withstand incredible pressure as you go forward through the development process.

Do you use the four necessities method in your writing? Have you noticed it in films you enjoy? Feel free to share your experiences with it in the comments.

The Future of Self-Improvement


The always excellent "99%" website is really on a roll lately - this two part article called "The Future of Self-Improvement" is full of insights into which character traits seem to predict the greatest long-term successes.

The Future of Self-Improvement, Part I: Grit Is More Important Than Talent


The Future of Self-Improvement, Part II: The Dilemma of Coaching Yourself

The website's slogan is "It's not about ideas. It's about making ideas happen" and they're absolutely right - the best creative idea in the world is worthless without someone with the talent and perseverance to develop it into a state where it can go out into the world.

Well worth checking out. Here's some more from their About page:

At 99%, Behance's think tank, we focus on what happens after inspiration — researching the forces that truly push ideas to fruition. Our profiles of proven idea makers, action-oriented tips, best-practices sessions, and annual conference are all designed to help you transform ideas from vision to reality.