The Four Necessities of a Strong Logline 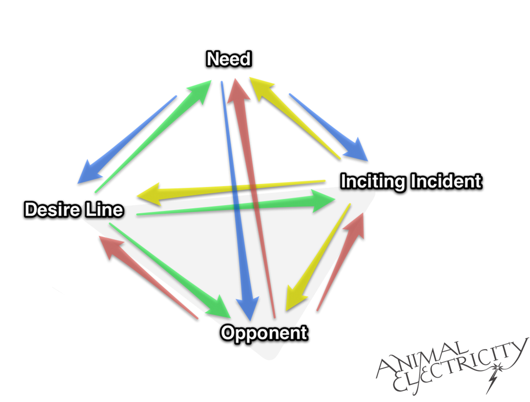 A little while ago* I wrote about The Four Necessities, which I still stand by as one of the greatest storytelling shortcuts there is. I mean shortcut in the responsible way of turning in great pages sooner, not half-assing your job. Starting with a protagonist, an antagonist, an inciting event, and a moral need, it's possible to weave an incredibly tight story... and without them it's extremely time-consuming, maybe even impossible in some cases.

With this stong kernel at the core of your story, John Truby identified (if there's an earlier source let me know) that you can be up and running extremely fast, and your story is resilient to a multitude of bombardments during development.

Since I wrote that blog post I've been meaning to get around to a follow-up covering how a powerful logline of 20-45 words could / should / would be made more powerful by integrating The Four Necessities. Today I'm waiting in for a delivery, so let's see if I can finally get through it. Shouldn't take too long.

Screenwriter William Martell wrote a very clear explanation of a good logline here and I've no reason to go over well-trodden ground, so if you're not 100% sure what I'm on about you should read that first.

Putting it all together, then, shouldn't be hard. We're looking for one or two sentences which contain a protagonist (or group), a force of antagonism (or several), and an internal and external thing to overcome (moral need, and external challenge).

To really hammer home the point of my original post on the matter: it's not enough that each of the four necessities be merely connected to one of the others; each must be as tightly and intimately connected to the others as possible, so as to maximise conflict and drama.

So the better your antagonist knows your protagonist the more power s/he wields over them. How about the inciting incident? Okay, whose children? If you wanted to you could write it even tighter and make the children those of the journalist, his brother, or someone else very close.

There is however usually a trade-off with the number of intimate connections you can make while still encompassing everything within a reasonable logline length. In search of the optimal balance I've often crafted a few dozen loglines focusing on different aspects of the story for precisely this reason, but that's another great aspect of crafting and analysing your story at this level of granularity first; the time it would take to discover your optimal kernel with screenplay-length iterations would be onerous, not to mention tedious. At a few sentences long at most, you can roll through numerous permutations in a single afternoon.

Here you really do have an incredibly powerful tool not only for creating the strongest possible story, but also for selling it, and that's what we're all here for at Animal Electricity.